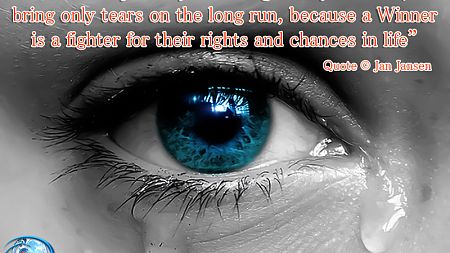 Sweet Revenge of Others to Us often Unpack Positive for Ourselves


Sweet Revenge of Others to Us often Unpack Positive for Ourselves
It is sad and at the same time almost unbelievable that people exist that begrudge another nothing, often it is envy because the other person is better or draws more attention then others. Therefore jealousy arises usually by a feeling of inferiority or the rivalry and competition with a question of feeling that give their thinking vision loss.
Champions can be combative but impossible in every battle for life time have the same performance and this will have result into accept it with a smile.
Indeed, there is always someone better than others, so it is with outward beauty at any given moment it fades after years, only the inner beauty can prevail forever.
Sometimes we simply are inferior and that is not that bad, we are not subordinate to another, but have a lower score with points, appearance looking, intelligent or anything else.
In vain, there are certain individuals who can not tolerate it or want to accept anything and then go do it to obstruct us for self-interest at least that's the intent.
Generally, these people are very sociable and willing to assist others with an exaggerated behavior of kindness but inwardly samples without remorse and guilty feeling when they do something bad to others with the exclusion of self-reproach.
Everything they do or are doing is entirely based on opportunism and if it will do not succeed they drop others like bricks in the water how deeper the better.
Only benefits they want to achieve and long-lasting friendships are almost impossible, because in a friendship is sympathy and love important and is not based on profit interests.
With this attitude and character such suckers often have a hateful superiority which they want to perform better towards then others and thereby it go wrong which lucky its employs giving justice for others.
Incidentally, they are sometimes the evil that wants to hurt others, mostly this will give others the advantage instead of a disadvantage which is a nice reward afterwards where we can be laugh and have fun of the benefit.
So it often comes up by the sweet revenge of another through envy on a rival of their character, it unpack a positive effect is that opponent yields gets the advantage.

All the best for You with a Good Health