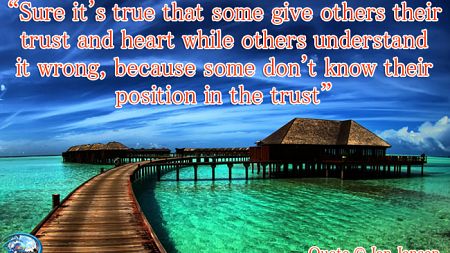 The relationship is not the puzzlement, but human is the protagonist


The relationship is not the puzzlement, but human is the protagonist


Most relationships have no difficulties, but people are champions to create them individually or in groups.
Spoken words can be air for some and in others they affect their lives and existence in the train of thought on their connections.
Trust is the basis of every relationship which can be continued maintained almost infinite with a substance through friendship.
Burdensome and evil speaking some information about an individual or multifarious is said and for transfer it to others.
Is listing to something what the person want we hear and maybe for teach us something or there may a benefit them if we follow it up.
In most cases it is so that it works like a boomerang, gossip over another is not satisfactory to that individual their personality, so there will be a counteraction.
People who have the need to talk about others will not hesitate to chatter about us and so there will be confrontations created for nothing.
Many a time, a tale by the narrator inflated to make it more interesting and believable about coming to the listener or listeners.
Whereby its giving a different view and a way of thinking happened and then give their opinion on the things what they have heard, which is not always appears to be the entire truth.
On occasion and self-interest is is it sometimes completely fabricated to damage anothes reputation often by jealousy or animosity.
Humans who like to make their voices heard about others, often look for a alternate position in order to get for what they actually want to acquire.
Every one who knows his self-esteem and self-respect does not show prove of evidence or resist by going on the defensive, yet the truth will come in due course.
If we know where we stand for and can proudly look in the mirror, we do not need to talk about the back of another, to move forward.
With this we not build a foundation, status or reputation, but we expose ourselves as a inferior party in any matter that makes us weaker when we use lies.
Reasoning about others or hurt them injustice is so accommodating, but are it liquide facts or only heard rumors from a slanderous tongue.
Which we must first make sure they are reliable and investigations need to do about their life and behavior, before we their said can confirm as the truth.
Something capture from the tongue of another without the other party to provide an opportunity and explain their version of the incident can be misleading.
A fox never loses its strokes, so if we have not any chance of let the counter-party to defend themselves in front of us,  will at all times show us the truth.
Slander will benefit for no one, and only can cause great inconvenience in every  relationship atmosphere.
Receive gossip about somebody, while we do not even know something about them or it, can give us usually already directly without checking the wrong impression over this loner.
Listen to others their opinion on someone else is not wrong but it is wiser to experience or retracing first needs before we condemn them.
It listened to store in our memory room and omniscient gives us many advantages in a meeting and we can then preparation for all eventualities.
In retrospect own experience can be totally different than it is said by others about the person, people or occurred cases.
The relationship is not the difficulty, only the people or persons around the protagonist (s) are in order to create confusion.
So themselves wanting to be the holy and taking chance for all interest, but truth, love and trust at every scene in a certain time-frame will always win.
By winning and received from  trust, an approximate crook can make his move, so beware.